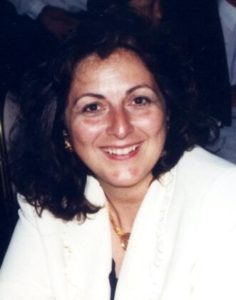 is a psychologist and acknowledged systemic family and group therapist, associate of the Athenian Institute of Anthropos (A.I.A.) since 1976, and a member of its Scientific Council of senior trainers, consultants and supervisors. She has served as Professor of psychology at the Social Work School in Athens and the Hellenic Open University graduate program, and as visiting professor of systemic epistemology at the graduate programs of the Universities of Crete and of Ioannina medical departments, and of the University of Athens. As A.I.A. Trainer she has participated in a number of training programs for professionals at home and abroad and in the American Group Psychotherapy (A.G.P.A.) Annual Conventions as a Faculty member.

She is married and has two daughters.

Her work focuses on health promoting community and large system interventions that utilize multilevel group processes and address issues of cultural and social change and the arising need for new self-organizing processes. Along with colleagues she has initiated an “Inter-Professional Consultation Program” for preschool and school institutions, community drug prevention centers, and mental health centers treating immigrant and disadvantaged families. Since 2010, she has led a nation-wide training program, sponsored by the Ministry of Education, for systemic applications utilizing group process in the school community, involving teachers from kindergarten through high school, from various regions in Greece. She has developed systemic methodologies for the training of families (focusing on couples and on mother-daughter relationship) and of professionals in the education, mental health and prevention fields. She has an extensive private practice as a family and group therapist, and supervisor since the mid-70s. She uses the “at least 3- system-levels and 3-views approach”, utilizing techniques co-developed at the A.I.A. over the last 4 decades. Her research focuses on early childhood environment and family, children’s cultural identity and heroes, group games across generations, cooperation patterns in families and groups, and multilevel interventions in institutions for children. She participates in the editorial committee of the Greek Human Systems Series since the early ‘80s, which has presented a number of important systemic thinkers to the Greek public and presently in the editorial committee of the EFTA Human Systems Journal. Her textbook on the systemic use of group process in adult training is widely used by the Athenian Institute of Anthropos p.44

She has been active in the development of the systemic community, participating in the founding and running of systemic scientific societies: founding member of the European Family Therapy Association, she has served in the board of its Chamber of National Family Therapy Organizations (EFTA-NFTO) as secretary 2004-2010 and currently as vice chair; founding member of the Hellenic Association for Systemic Therapy (HELASYTH) she has served in its board since the beginning and as chair for 2004-2010;

We're not around right now. But you can send us an email and we'll get back to you, asap.